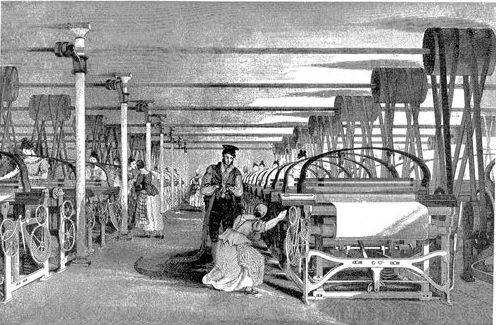 Question : What is meant by ‘Industrial Revolution’? Mention the reasons in which the Industrial Revolution became possible.
Answer : industrial revolution is a time transition in which some countries started new manufacturing processes to increase the production of several types of things to export other countries or fulfill their own needs. They replace hand driven machines to automatic machines in this era to increase the production in the country. This period was almost 1820 and 1840 .

According to historian Heijn, “Industrial revolution means mechanization of home industries”.
This historical event (Industrial Revolution), which made possible radical changes in the industrial sector, has special significance. These types of reforms made countries economical strong and rich , countries where this revolution take place become powerful in world’s eyes. It not only affected the ancient economy, social character, behavior of finance and money, production and distribution system, relations of different sections of the society and values of life, i.e. all spheres of life, but it changed them. This one change made several changes of different traditional systems.
Following were the main causes or reasons of industrial revolution:
1. Scientific Invention – several invention take place in just before this era which bring this industrial revolution so we can say that This was the most basic reason for the Industrial Revolution. To meet the growing demand for textiles, the need for invention was felt for new production methods. Scientific inventions in the textile industry (like flying shuttle, spinning jenny, waterframe etc.) gave birth to factories. The need for iron and coal in factories made possible the change in means of transport. Thus changes began to take place on a vast scale in all areas. These countries going towards Scientific methods after skip the traditional methods , this changes take place because people believing science more than god or spiritualism.
2. Accumulation of capital – The development of business led to accumulation of capital, which made it possible to invest in industries and to adopt inventions. Some developed countries knowing that if a country is strong economical it means it is strong in all fields. On this fact these countries trying to build their own new methods to make country economically strong.
3. Geographical Discoveries – New countries were discovered by sea travel. This led to the establishment of colonies and new markets for the sale of manufactured goods and purchase of raw materials. After these Discoveries these countries has sufficient raw material and demanded market , to fulfill the requirement they need more production which can be possible using this industrial development.
4. The availability of coal removed the difficulties of smelting iron. As a result, the manufacture and use of large machines became possible. And these machines now used in different types of industries to replace the hand driven works.
5. The spread of education aroused the desire of the intellectual class to conquer nature. New inventions took place. The feeling of expansion of empire was awakened by going to the previous areas. education bring inventions and desires to make other countries depended on these developed countries and to make this dream true they bring changes in industries.
6. Belief in Materialism – From the Renaissance (Humanism) man changed his pessimistic attitude towards materialism. The trend of materialism led to the expansion of the market. materialism bring the idea of conquer other countries by different methods or make them depended for their needs.
7. Use of steam engine, which made it possible to build large factories and radical changes in the means of transport.
8. The increase in population and the increasing demand from it encouraged man for industrial development. Increased population demand can not be fulfill by ordinary methods in industries.
9. Other reasons –
i. The French State Revolution and Napoleon’s policies gave impetus to the Industrial Revolution not only in England but also in the rest of Europe.
ii. The feeling of nationalism also inspired the Industrial Revolution.

The American Revolution was a conflict of e[…]