Tag Archives: why was the treaty of versailles unfair 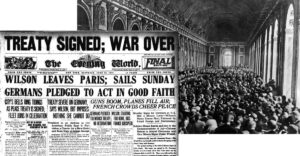 Critically review the Treaty of Versailles , U.S. History , terms , why was unfair or fair